Rotavirus infections in children and adults can last approximately three to eight days and symptoms include:

The combination of symptoms can lead to dehydration, requiring admission to hospital, especially in young infants. Before the introduction of a national infant rotavirus vaccination programme in 2013, an estimated 55,000 gastroenteritis cases caused by rotavirus occurred in Scotland each year in children less than five years old. Approximately 1,200 of these children were hospitalised.

For further advice on the transmission and prevention of rotavirus, visit the NHS Choices website.

Guidance for health professionals can be found below:

Members of the public can find rotavirus vaccine guidance on the NHS Inform website.

This laboratory-based surveillance study shows significant reduction in reported rotavirus cases and a shift in proportion from G1P[8] to G2P[4] strains after introduction of rotavirus vaccination in Scotland. The data will be used to ascertain cross protection against strains and identify vaccine-induced rotavirus strain shifts in the future.

Rotavirus is highly infectious and a leading cause of gastroenteritis in children worldwide. In Scotland, most children will have had at least one rotavirus infection by five years old. Prior to the implementation of the rotavirus vaccination programme, rotavirus reports peaked between February and April. This caused considerable additional pressure on the NHS, particularly in primary care and paediatric healthcare facilities.

In July 2013, Rotarix®, a live attenuated vaccine was introduced into the routine infant vaccination schedule in the UK, with doses given at eight and 12 weeks.

Figure 1 shows the number of rotavirus laboratory reports in Scotland from 2011 to the end of March 2021. Following the introduction of the immunisation programme there has been a marked reduction in the number of laboratory reports, which clearly demonstrates the impact of the vaccine. A reduction of laboratory confirmed rotavirus samples has also been seen in unvaccinated children suggestive of indirect herd protection due to the vaccine. 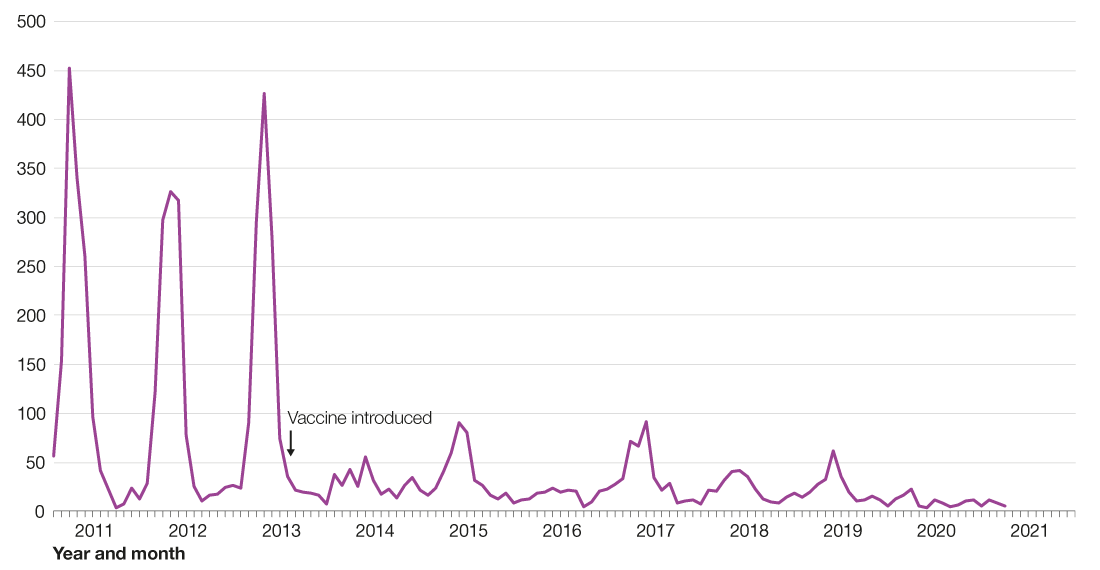 Figure 2 shows the number of admissions for rotavirus for children aged less than five years by month in the three-year period 2014 to 2017 compared to an average of the years 2010 to 2013. This figure shows the impact of the vaccine on rotavirus-related hospital admissions of young children. The increase in hospital admissions observed in November and December of 2016, was prior to the rotavirus season and therefore most likely associated with increased circulation of norovirus at that time.

Figure 2: Number of admissions for rotavirus and viral enteritis (including rotavirus) of children less than 5 years, 2014 to 2017 compared to 2010 to 2013 pre-vaccine average 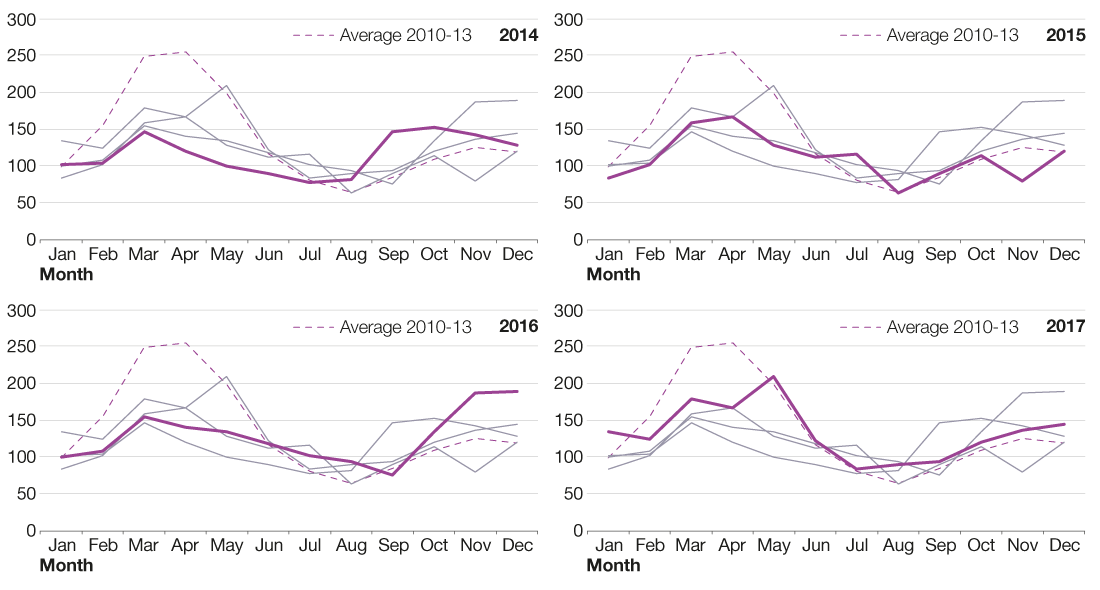 Infections resulting in hospitalisation represent a fraction of cases that occur in the community which, while less severe, cause substantial morbidity. Methods to monitor the impact of the vaccine programme in community settings have also been established to obtain a more complete representation of the impact of the vaccine on the burden of disease.

Figure 3 presents the consultation rate per 100,000 of the population for infants less than one year of age for gastrointestinal illness and compares 2014 to 2018 to an average of 2010 to 2013 before the vaccine was introduced. The impact of the vaccine is clear with an absence of a seasonal peak of consultations corresponding to the rotavirus season in the years 2014 to 2018. 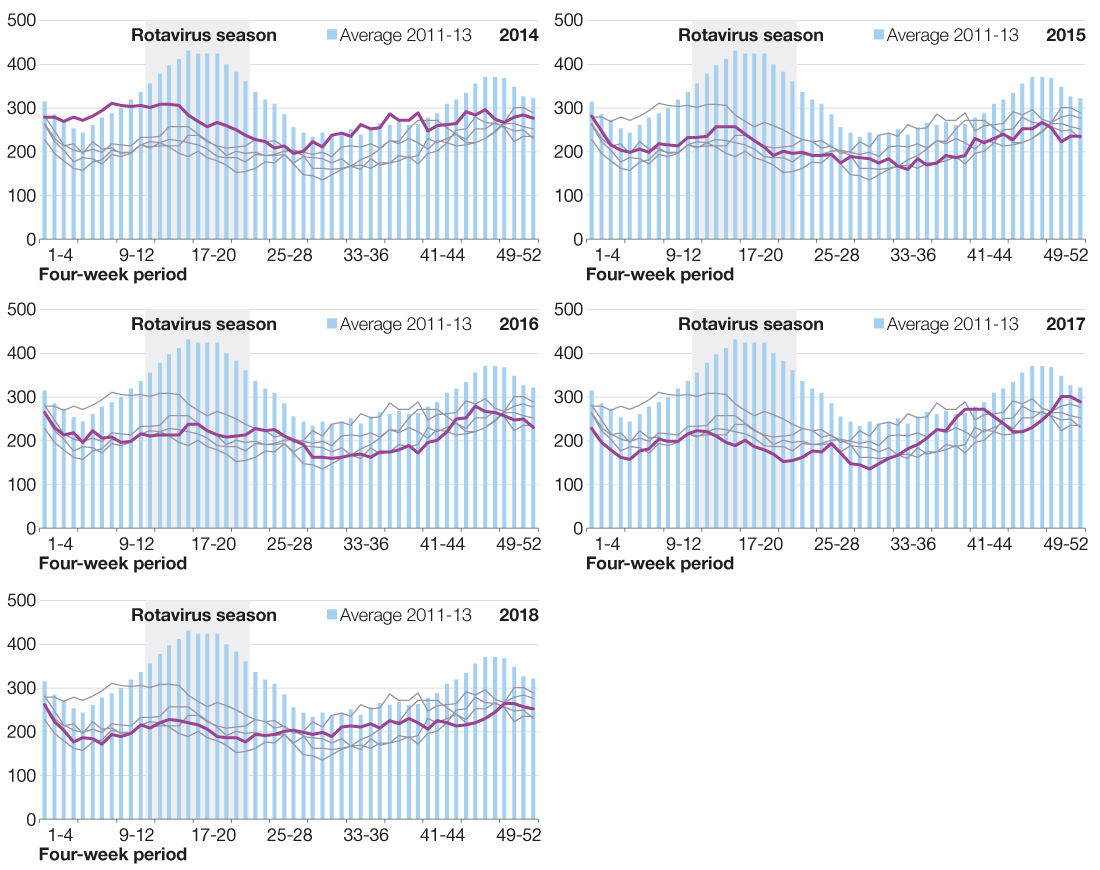 Rotavirus is the leading cause of severe gastroenteritis in infants in the UK and most children will experience it before the age of five. Unlike in the developing world, rotavirus rarely causes death in the UK, however infection results in a significant number of hospital admissions for severe dehydration particularly in infants, where there's a risk of the infection spreading to other vulnerable patients. Additionally it causes an increased burden in primary care when services may be stretched with other seasonal infections such as influenza.

Rotavirus vaccine programmes have been in place prior to 2013 in a number of countries including:

A national rotavirus vaccination programme using the vaccine Rotarix® was introduced into the routine infant vaccination schedule in Scotland in July 2013, with approximately 93% vaccines uptake rate.

The vaccine provides protection against the most common strains of rotavirus, but not other enteric viruses such as norovirus.

Infants are offered two doses of the oral vaccine Rotarix®, which is a weakened form of virus which can't cause disease but which protects against rotavirus at an interval of least four weeks between doses: at eight weeks and again at 12 weeks.